Did you know that a bolt of a lightning can reach 50,000 degrees Fahrenheit? The intensity of the heat can actually be compared to the surface of the sun!

Although the state of Florida is mostly synonymous with warm weather and the occasional hurricane, it also has a fairly notorious track record with lightning strikes. In fact, Florida is estimated to experience an average of 24.7 lightning strikes per square mile. Furthermore, between 1959 and 2013, Florida’s lightning-related deaths reached 468, placing “The Sunshine State” at no. 1 on the list of states with the most deaths related to lightning strikes. Lightning has injured at least 2,000 people in Florida since 1959. 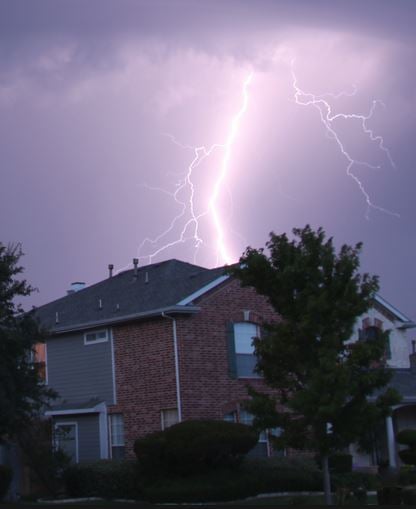 Sometimes, a bolt of lightning can cause interior damage to a home. For example, lightning may enter a home through any kind of wiring. Sometimes, lightning hits the corner of a home and courses through the electrical system in the attic. The smoke detectors would go off, prompting the family to realize its attic is on fire.

More commonly, lightning can strike trees which can fall and cause roof damage. Although very rare, lightning surges can cause wall cracks that are very difficult to identify. In such a case, only a public adjuster can help you notice small cracks that might not have been there before. Standard home insurance covers damage from lightning, including zapped electronics and fires caused by lightning; however, you need a professional to uncover and properly represent your case to get you the maximum amount of money for damage that is seen or unseen.  The Monty S family of Wellington received the money for an entire new roof due to lightning damage to 10 square feet of damage.  The Morris G family of Coral Springs received the money to repaint the entire exterior of its house because lightning hit the front door and blew out the stucco around the frame.  John S received a reimbursement on his renter’s policy for a lightning strike that fried his computers and electronics.  To have true professionals handle your claim Contact Florida’s BEST Public Adjusters at 561-715-9557. Our claims adjuster professionals have been helping homeowners get proper settlements for more than three decades.

Category: Public AdjusterBy August 11, 2014
Share this article
Share with FacebookShare with TwitterShare with PinterestShare with LinkedInShare with Google+Share with WhatsApp